A very common application to eliminate powdery mildew in crops is the use of sulfur pots (burners) or Sulphur evaporators. Sulfur helps overcome common plant diseases such as mold, especially powdery mildew, by changing the pH on the surface of the plants. This pH change creates an unstable growing environment for fungal growth. 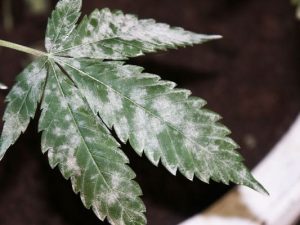 This old-school solution to poor environmental controls and hygiene is not compatible with modern LED grow lights.  LEDs are susceptible to corrosive gases (VOCs) that are commonly found in not only cleaning agents (chlorine) but in many remediation applications such as the use of sulfur to eliminate powdery mildew.  Corrosive gases can penetrate the LED encapsulant causing the lead frame of the LED to become discolored.  This corrosion will effect the performance and lifetime of the LED and subsequently cause premature failure of the LED Grow Light.

Exposure to sulfur or choline gases is easy to detect and will void most manufacturer’s warranties.   If you are seeing a discoloration around your LED you are most likely the victim of exposure to VOCs or Corrosive gases.

The LED photo to the right shows the signs of exposure to sulfur, as later verified by speaking with the lead grower.  The client had used sulfur burners for about two weeks during the night cycle, and within a few weeks started seeing a abnormally high failure rate of their two year old bloom lights.   After further analysis it was determined that a chlorine bleach solution was also used to clean the lights between bloom cycles.  The repeated exposure to sulfur and chlorine caused a widespread LED failure.

There is no alternative to maintaining good environmental controls and good farm hygiene!

For more information or an on-site environmental audit – click here